Irezumi, also called Horimono or Wabori, is a traditional Japanese style of tattooing that is created using large scale motifs based on Japanese mythology and religious icons, historical characters and scenes from nature, the elements, and well known Japanese fables. Irezumi is known for its dark and vast backgrounds based on water, wind and clouds that encompasses the entire area around the main motif and fully fills the body part being tattooed, including the whole body except hands, feet, head, face and neck in the case of a proper traditional bodysuit. 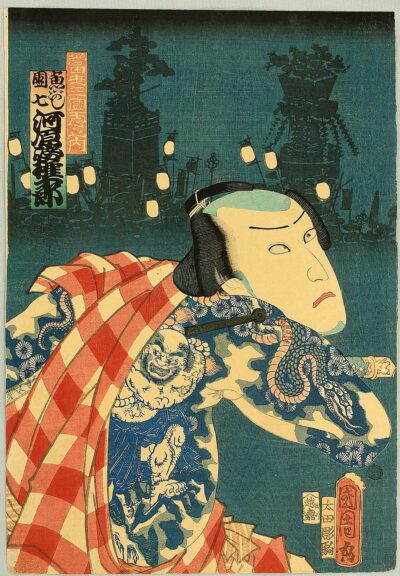 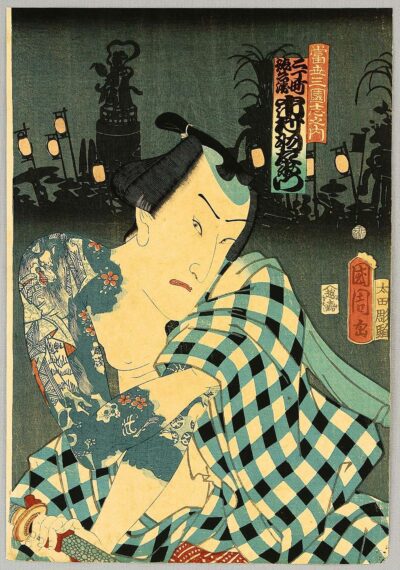 Irezumi isn’t simply the Japanese word for “tattoos”. Throughout the country’s history different words have referred to tattoos, and the word irezumi itself has been written with different characters, each having a separate meaning or nuance, whether that was the ‘irezumi’ (入れ墨) that was a branding mark, meted out as punishment to criminals, or the ‘irezumi’ (刺青) that was done of free will. Other words have been used, such as ‘irebokuro’ (入れ黒子) which dates from the 1700s. Additional old terms include ‘mon-mon’ ( 紋々), where ‘mon’ refers to a crest, or ‘monshin’ ( 紋身) which literally means a crest on one’s body. These are not used today. The word ‘horimono’ (彫り物), however, still is; it can refer to tattoos or any other engraved thing. More recently, the term ‘wabori’ (和彫り), which means “Japanese engraving” was coined in the 20th century to refer specifically to Japanese tattoos.

There are two different type of Irezumi: Nukibori and Gakubori.

NUKIBORI    – Singular design, without any background. 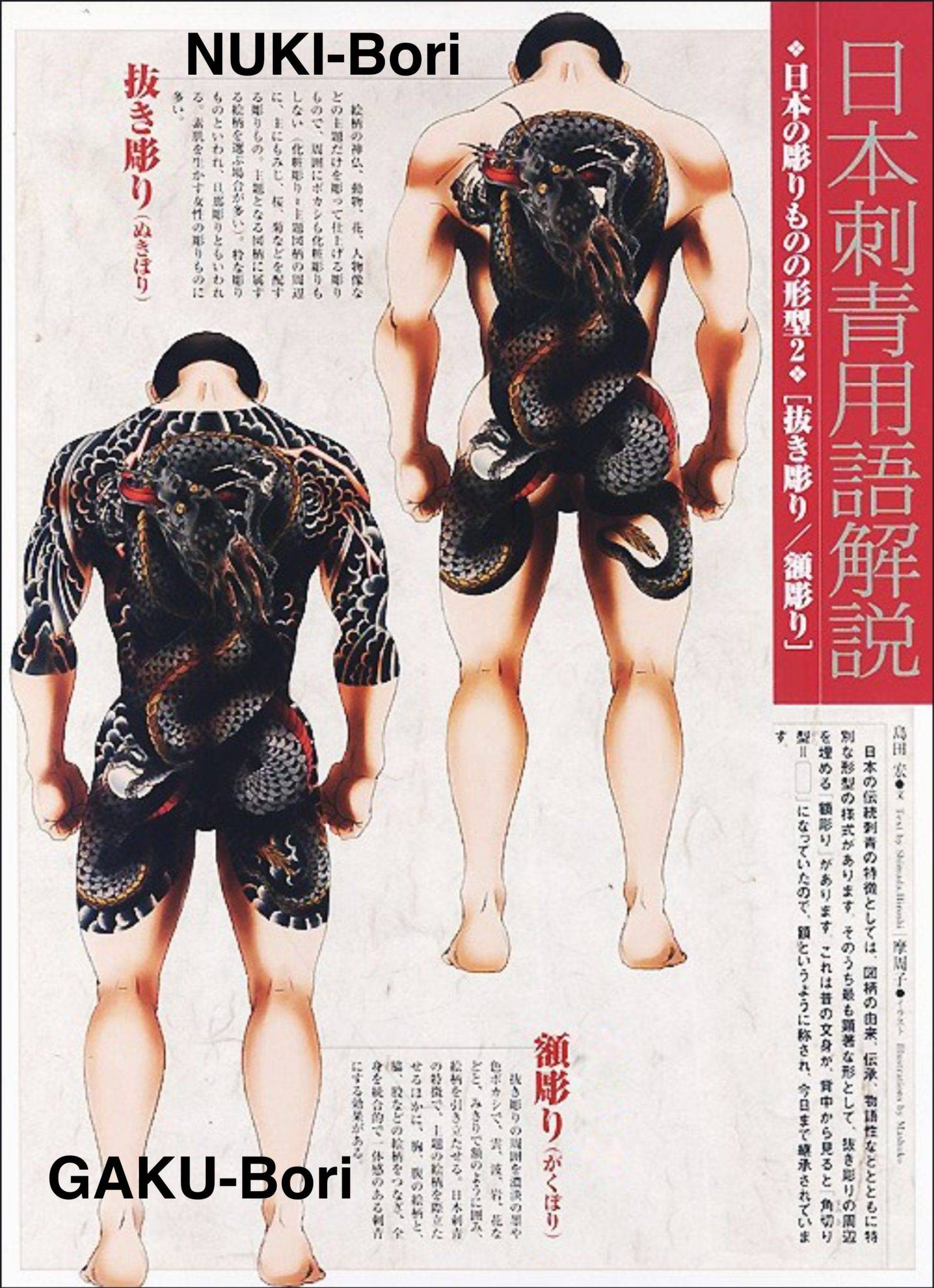 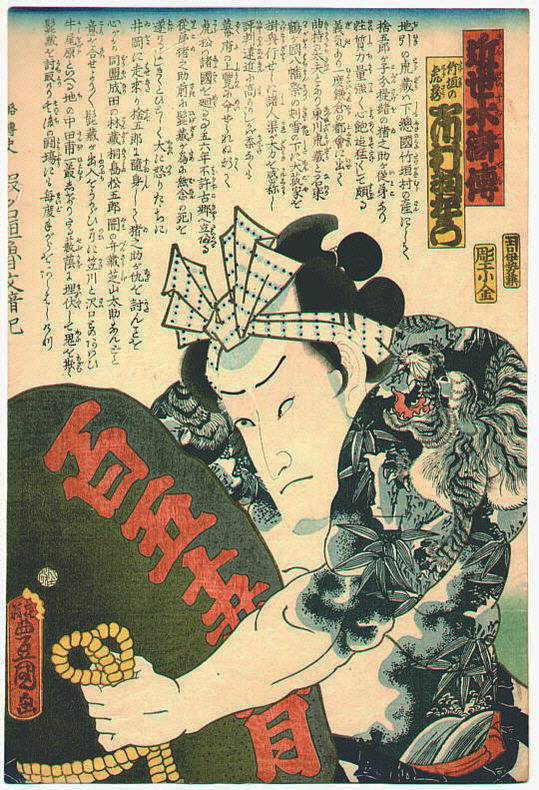 The name “Gaku-bori” can be literally translated as ‘framed tattoo’(Gaku 額 is “framed”, Bori 彫り is “tattoo”). Gaku-bori has specific shapes and names depending on a part of the body and always formed by Mikiri – boundary between tattooed skin and bare skin. There are few different types of Mikiri(Akebono Mikiri, Botan Mikiri, etc.) depending on the boundary type.  Decision on what exactly type of Mikiri can be used in tattoo project normally made considering the way it could be connected  to the new tattoo pieces in future.

The design is used to fill in the background with elements like clouds, waves, wind, and fire. Think of gakubori as a way tattooers can frame the entire piece, helping to set the stage for the tattoo. In gakubori, things like clouds and water are obviously not bound by don’t-mix-the-seasons conventions, as they exist year-round.

This refers to the areas that are left untattooed. Skilled tattooists know that the parts of flesh that are not inked are just as important as the parts that are. Untattooed areas can serve as a contrast or even as part of the shading. The use of nukibori is limited only by the tattooist’s creativity; it can appear anywhere within a tattoo. The term is also used in relation to Japanese tattoos that do not have tattooed backgrounds. The untattooed areas, naturally, are the nukibori. 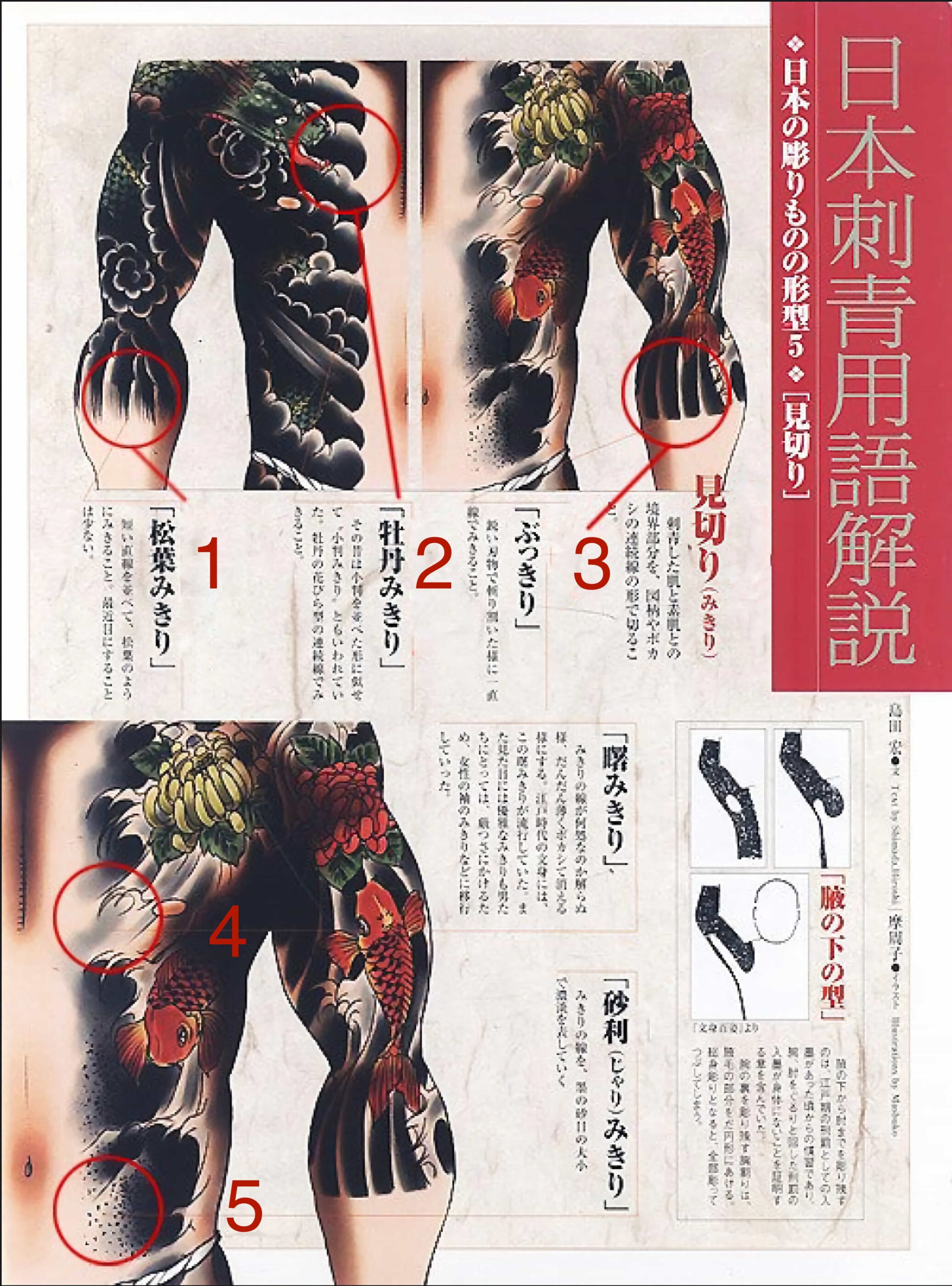 In irezumi, the borders are known as mikiri. Since Japanese tattoos aren’t isolated one-off designs, but large pieces with background that can cover much of the body their edges are a key design element: Irezumi must have mikiri, and they are part of the Work’s initial design conception. There are several styles to choose from, many of which are named after nature motifs. The most comnmon are botan-giri and bukkiri.

This wavy mikiri makes its border with a series of shapes that evoke the round petals of a botan (peony). Despite being inspired by the flower, the botan-giri is typically made up of waves and clouds.

This sharply defined mikiri has a straight edge that looks like it was sliced with a katana.

Akebono means “daybreak”, this somewhat ambiguous border gradually becomes less intense in color, just like the rays of the sun.

Literally “gravel border” In this design, the irezumi’s edge gradually fades out with a series of small dots.

Traditionally, Irezumi is based on a full body concept that is built in sections. Each section normally takes entire body part and has it’s own pattern which fits the previously done and possibly the next one, though  also are looking great alone. The backgrounds ensure that all tattooed body parts become one piece of tattoo which is ‘framed’ by a body shape itself – bodysuite.  The backgrounds are always done in black and grey, never in color, and the real subject of the tattoo, oppositely is usually done in color to some extent. Irezumi clearly have it’s own distinct and timeless style, which – if done properly, still looks good even after 20/30 years.